admin Posted on 26. 1. 2010 Posted in Programming No Comments Tagged with framework, kohana, php

Just like most people, I like working on projects that are exceptional and require an innovative approach, but just like with most other jobs, the greater part of my work tends to be repetitive (and one cannot allow himself the luxury of turning such projects down). A framework is supposed to make this repetitive work a great deal easier. But when building a simple website such as this one

, there’s no actual need for a sophisticated framework. The bigger projects, where a framework could have been useful, were always to be tailored to the client’s individual needs so I deemed it wiser to stick to clean php code; and beyond that the deadlines were usually so deadly that there was no space for trying out anything new.

However, learning a framework seems to be an inevitable course, just as I had to start using subversion or IDE eventually, so I’ve been eying php frameworks for some time now; although in no particular hurry, having only the search engines to consult the matter with. There is a project or two looming right now where I could use a framework, so which framework should I choose, that is the question.

After some reading and skimming in the last few months, I eventually decided to try out Kohana

. The highlights found in various benchmarks, comparisons and on the framework website that were taken into consideration were these:

I guess I will come across more pros and cons in the process of learning. I downloaded Kohana, “installed” it (actually, all you do is copy it to the desired location and make sure the file permissions are right) and tried to get the grip of what is where. And now I just wait until a suitable project pops up. 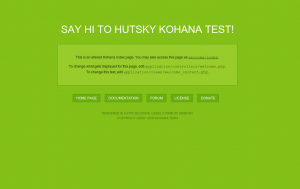